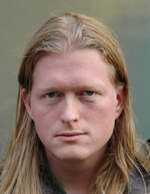 A lovely last night at tell it slant, our old poetry bookshop in The Project Cafe, now admirably run by Kathrine Sowerby, launching another Clydebuilt poet on his way with a first collection before I launch myself South and East across this island to work for The Poetry Trust.

Christie Williamson‘s Oo an Feddirs, published by Luath Press, is a book I have been waiting for since I first heard Christie read at St Mungo’s Mirrorball five years ago. Christie with his long fair hair and strong Shetlandic voice seemed to come from another age, and his poems tangle Shetlandic Scots and English together in a weave so subtle as to be both intriguing and accessible – a rare pattern. “Oo” is Shetlandic for wool, while Feddirs can mean feathers or fathers.  He speaks of the ambivalent  nature of fatherhood, juggling boats for his son, and remembering “when someone else/was the clown/wishing he/was the child again.” He writes of his daughter’s first Carnival, music and dreams mingling “under her tuft of hair.” He speaks vividly of his passion for his partner Hazel Frew, herself an excellent poet, and literally writes her body as it writes on his.

But it is the Shetlandic poems which grip me most – an ancient voice is speaking of the things of everyday and making them seem eternal, as in his poem, Truth, where “da answer phone’s caald/unblinkin licht” says “‘Look at de…./fir aa dy runnin aboot an rantin/an tinkin an bellin desel at life/an gallavantin, du’s come hem/ower laet, an dis truth/can nivvir be erased./Du haes nae new messages.'” That poem certainly rang true with me, as did another, in which he bewailed every liberal parent’s realisation that “raisin’ the bairn wi his ane ideen” is “aa very well, till he starts spikkin back”.*

Being a weaver of voices by nature, Christie chose to interlace readings from the book with “a poyim or twa” from other poets who had helped him on his journey to this point, including myself, Kathrine, Jim Carruth, Cheryl Follon (whose new poems about Russia and love were an eye-opener!) and “da man who give me the best rejection letter of my life”,  Gerry Cambridge, editor of Dark Horse magazine, who finished the night with a bit of music with a young singer songwriter he knew and some harmonica of course. Alexander Hutchison sadly arrived too late from another event to give us his traditional song at the end. But all in all, a lovely way to say farewell to the Glasgow “poyits” for now, though many of them will hopefully join me at future Aldeburgh Poetry Festivals once I get settled in… in the meantime, you can of course buy Christie’s book from tell it slant. 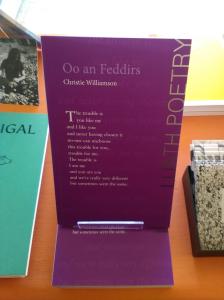 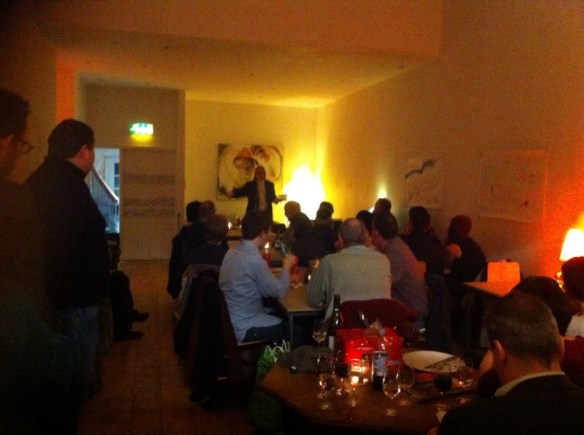 * There is a very helpful glossary provided at the back of the book by Luath, from which these translations come: du/de– you; aa – all; hem – home; laet – late; bairn – child; oo – wool; feddirs – feathers (or fathers).

Writer Ellen McAteer is founder of Tell It Slant poetry bookshop in Glasgow, General Manager at Poetry London magazine. She was a visiting lecturer at the Glasgow School of Art, and a mentee of the Clydebuilt Verse Apprenticeship Scheme, under Alexander Hutchison, and a singer with the band Stone Tape, as well as a solo singer who won a BBC Radio competition with her song Blue Valentine. She was Director of the Poetry Trust, which ran the Aldeburgh Poetry Festival, a director of the Scottish Writers’ Centre, a visiting lecturer at Oxford University's MSt in creative writing, and a member of the core group of performers at the Hammer and Tongue spoken word collective in Oxford. She is a qualified Librarian.
View all posts by Pedalling Poetry →
This entry was posted in Uncategorized. Bookmark the permalink.